Iowa State hires Otzelberger away from UNLV to replace Prohm 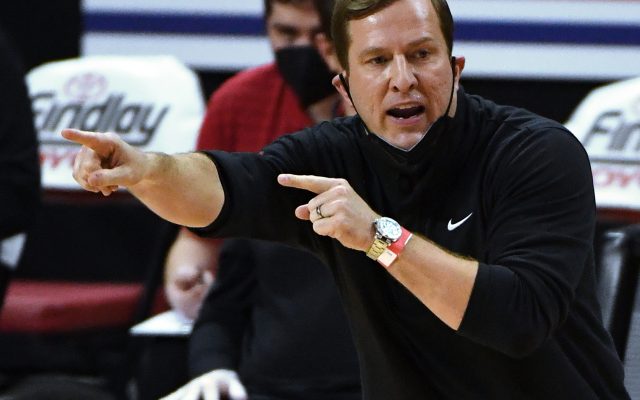 LAS VEGAS, NEVADA - JANUARY 25: Head coach T.J. Otzelberger of the UNLV Rebels gestures during his team's game against the Utah State Aggies at the Thomas & Mack Center on January 25, 2021 in Las Vegas, Nevada. The Rebels defeated the Aggies 59-56. (Photo by Ethan Miller/Getty Images)

T.J. Otzelberger is returning to Iowa State as head coach after two years at UNLV, athletic director Jamie Pollard announced Thursday. This will be the 43-year-old Otzelberger’s third stint in Ames, his first as head coach. He was an assistant under Greg McDermott, Fred Hoiberg and Steve Prohm, who was fired Tuesday after a 2-22 season in which the Cyclones went winless in the Big 12. Otzelberger is 99-63 as a Division I coach. At South Dakota State (2017-19), Otzelberger’s teams were led by Mike Daum and built reputations for winning and high-level offense. The Jackrabbits were 70-33 overall, won two Summit League regular-season titles, made the NCAA Tournament twice and the NIT once. SDSU finished in the top seven in scoring offense his final two years. Otzelberger had been McDermott’s lead recruiter during his first run at Iowa State, which began in 2006. Otzelberger was credited with recruiting standouts such as Craig Brackins, Diante Garrett, Mike Taylor, Scott Christopherson and Melvin Ejim. Otzelberger was retained when Hoiberg was hired in 2010, and the Cyclones made the NCAA Tournament twice before he left for an assistant’s job at Washington.Otzelberger returned in 2015 for one season under Prohm. The Cyclones won 23 games and reached the NCAA Sweet 16 that year.