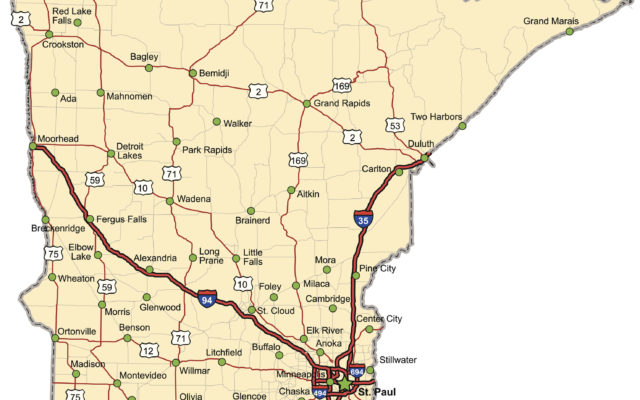 Highway map of the state of Minnesota with Interstates and US Routes. It also has lines for state and county routes (but not labeled) and many cities on it as well. All cities are the County Seats and the Capitol (and some others).

After decades of protests and pressure on the US federal government, the Leech Lake Band of Ojibwe will be returned land wrongfully taken from them since the 1940’s.

In 1948, the Federal Bureau of Indian Affairs had an incorrect interpretation of an Interior Department order. The order stated it had the power to sell tribal lands without consent of the rightful landowners majority say.

“The land transfers were acts of outright theft,” says Leroy Staples Fairbanks III, a representative for Leech Lake’s District 3. “They mailed out letters to people. If they didn’t get a response, they took them as a ‘Yes.'”

The sales of the land ended in 1959 with more than 1800 acres of land were taken by the Interior Department.

With the returned land in their hands, known as the Leech Lake Reservation Restoration Act, the Band has begun surveying the area in detail, and 11,760 acres are expected to be restored to the community in months to come.

Historically, tribal communities and county governments in Minnesota have had very difficult relationships, but with agreements such as this has Fairbanks calling it “a humongous turning point for our relationship with the county”.

The tribe shares more than 2,000 miles of boundary with the Chippewa National Forest and nearly 40% of the forest lies within Leech Lake tribal lands.

The partial restoration of the reservation will bring more than improved relationships but also improve the lives of citizens of Leech Lake. Upon surveying the area, Ben Benoit, the tribe’s environmental director, found areas where new housing for families can be established.

“People want to live by where they work, by where there kids go to school, by the store,” Benoit says, “We’ve already started planning for the future.”